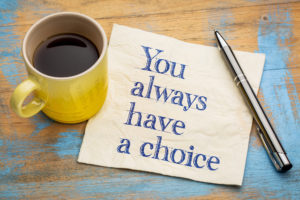 Caregiving can sometimes feel like you’re walking on a tight rope…with your loved one, the medical team, family members or friends.

When Gary first started on chemotherapy, we identified several concerns ahead of time. We wanted to be sure he maintained his weight. We also felt having as healthy a diet as possible would support his immune system.

Gary already ate well when I met him. But eating healthy and moving to such a restricted regime overnight was a challenge. I remember my first trip into Whole Foods, armed with a list of items like kamut, quinoa and wheat grass. Even in a health food store, I had to stop and read every label, watching for sneaky sugar or white flour additives. It took me over twenty minutes to make it down just two aisles. At that point, I felt as if the shelves had grown to twelve feet and were closing in on me.

I made it through that shopping trip and eventually, putting together vegetable lasagna, turkey barley soup with kale and oil free stir fries became first nature for me. Gary was diligent about following our healthy menus for over two years. Then, one day, my acquired knowledge went from being a contribution to a major point of contention.

Suffering from years of a diet restrictions and side effects of chemotherapy like loss of taste, Gary reached into the freezer section for some soy ice cream. As usual, he handed it over for me to peruse the ingredients and decide if it fit into his nutrition plan. When I pointed out the high level of sugar and recommended he not choose this, he threw a fit. Just like a child wanting their ice cream and being told no.

I was the bad guy and I was trying to control him. He was tired of it and he was going to eat whatever he wanted. Arguments between us were rare. But we were both short of patience, full of fear and exhausted emotionally and physically. I’d taken a step off the tight rope.

There will be times when being an advocate for your loved one means saying or doing something on their behalf means you can’t walk the fine line. You have to take a stand. You begin by always being pro-active. Sometimes you have to step it up to demanding. Once in awhile, you will find you have to get loud.

Right from day one, I took on tracking Gary’s blood tests from week to week. It was important to know the highs and lows of his cell counts. Initially I took a fairly passive role, sitting quietly and taking notes. But when Gary’s ongoing concern about low energy levels from the chemotherapy weren’t being resolved, I had to take the reins.

I had read an article in People Magazine about a drug being used by athletes to hyper- oxygenate their blood. I tore the page out of the magazine and armed myself with it for our next doctor visit. I waited for Gary to make his usual report of being extremely drained and then presented the article to the doctor asking if perhaps the drug might help him. He acknowledged that it would, wrote a prescription and handed it over as if it were normal for a patient’s wife to find a pharmaceutical solution to her husband’s side effect.

Part of me was angry that it took a magazine headline to find a solution. I made a choice in that moment that this was a good time to walk the fine line instead of possibly alienating Gary’s physician. I focused, instead, on being grateful we’d found a resolution.

Knowing when to speak up, when to rattle the bars on the cage and when to stay quiet requires awareness. Keep your primary objectives in mind. Choose wisely as to when to turn up the volume…but do it when you need to.