After finalizing plans for how and where I would let go of Gary’s wedding ring on my trip to Kathmandu, we wove through throngs of people and lazy cows who had supreme right of way. As we entered the temple at Boudhanath, the smell of incense filled the air, already rich with the chanting of om mani pad me ohm, the Tibetan prayer of compassion.

I removed the ring from the chain that held it close to my heart and entered the alter room. Inside, a beautiful turquoise Rinpoche statue held court with one hand raised in blessing. I said a final prayer, envisioned the cutting of a cord, symbolic of ties that bound me to the sadness of what had been lost.

What had been lost?  Love.  A great, deep love cradled in respect and trust.  History.  The history of two people finding each other, fitting with each other and filling each other. The creative coupling of two artists making their way in the film industry, pushing each other and themselves to achieve their separate but shared dreams.  I gently dropped the ring into an offering bowl.

When I landed in Toronto eighteen days later, I felt lighter and freer from the past.  The ring had found its resting place but the wedding dress and album still remained.  I wondered to myself what was to be done with the dress.  It seemed to be next on the list.

Less than twenty-four hours later, while watching the news, a story came on about a local charity.  They took in designer dresses and resold them at reduced prices to women who couldn’t normally afford them.  The proceeds went to pay for camp for children with cancer.  It couldn’t be more perfect.  The next day, I happily pa 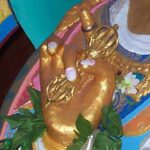 cked up the dress and dropped it off knowing it would be appreciated.

Three weeks later, I received an email and photo from Bobby.  The head priest at the alter had found Gary’s ring and instructed his temple priests to place it on the hand of the Rinpoche statue that overlooks the alter of endings and new beginnings.

Gary’s ring now adorns the golden finger of a hand raised in blessing in a temple in Kathmandu.  The princess dress with a hundred satin buttons down the back, beaded heavily like the tears that had hung upon my heart for so long has fulfilled the dreams of another.  All that remains is the photo album that sits most of the time in a coffin gray box.  For now, I’ve decided it is something I will keep to remember the dress, the ring and the love of my life.